Thursday, 5-06-1997
I hope the journey goes to Noordwijk. Huis ter Duin for example. I will enroll for a dancing course. Of course I need the collaboration of other parties. So yesterday I passed by the town hall of Utrecht to ask for an appointment with Lord Mayor Opstelten in order to present him the Business Plan. I spoke with his secretary Mrs Van Ginkel. I also went to the District Court and will continue that contact. I also decided to enroll for a dancing course because romantic is in the air according to the stars. The horoscope of my Queen of the Coast says in that respect: 'Enjoy every moment, but take care for spending too much money. For you a romantic period is going to begin. A love relationship will become stronger the coming weeks.' I sent her a letter yesterday with the request to send information about the possibilities to stay the nights in de Baak on 20 and 21 June, but perhaps it would be more worthwhile to sleep in Huis ter Duin on that occasion. Yesterday evening I had an excursion through the medieval parts of Utrecht guided by a member of the so called Gilde (guild). It was a very pleasant group and afterwards we had a drink in Graaf Floris. There they played Romance in F Dur of Ludwig van Beethoven. I decided to join that group every Wednesday. This morning I will go to the University Library for genealogical information about the Belgian Royal House. I will also prepare the Business Plan for Mr Opstelten with new points of action, e.g. a preparative group to establish the European Cervantes Foundation. The telephone does not work yet, but I was visited by a serviceman and the interruption will soon be solved. I found the genealogical information of the Belgian Royal Family in a book with a photograph of yours at Ascot wearing a red and purple combination and a beautiful hat in red and purple. I think this will remain the Perfect Combination. I really should like to have that photograph. I call it Vision because it was taken in the time that we discussed vision development in Noordwijk. I remember. This moment I play Beethoven and remember a day in summer 1966. I brought my luggage to Euston Station and went back to The Mall and I saw your former Mother in Law passing with King Hussein of Jordany. I asked the people around me who was supposed te be Her guest. The answer was 'It must be someone from The Continent. I think he is from Belgium!' I hope you understand my problem. Your people did not even know at the time that we existed. The same day I went to Wembley to see a football match between Mexico and Uruquay and took the night train to Fort William in Scotland. 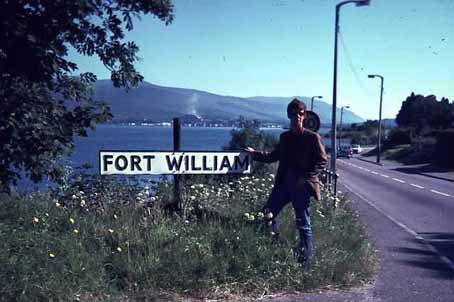