Monday, 9-06-1997
I received enclosed confirmation for my residence in Leeuwarden from 12 till 14 July and I hope We can use the Queen's Room on the 13th to reach an agreement. Today I start with translating my letter to Mr de Koning:

'Dear Herman,
I would like to thank you for the pleasant surprise that I was allowed to receive in connection with my move into my new house and your best wishes. 'Until (ca) 2000' is written on your card. I hope however that you will be able to come along some time in an earlier stage. It so happens that there is still a bottle of Veuve Clicquot waiting here that I should like to finish with three of us. 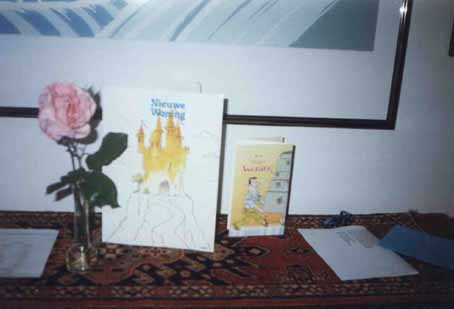 The start in Utrecht is promising. There are again red roses in my room. Now from a real Lady for my eldest son Mark who played yesterday the stars from heaven in the Town Theatre of Utrecht as main figure in the version edited by himself of the musical Chess. I ever told to him: 'If I will ever again start a new relationship she has to belong to nobility". On this point Mark has taken an advantage on me already. They get along very well together and I am very happy with that.

Mark could not carry all the bunches of flowers that he received yesterday. So he delivered them to me for a short while. It seems if one has reflected very carefully about it. I see a bunch of Yellow-Orange lilies with purple Hyde flowers and a still more carefully composed bunch of Yellow and Orange flowers with Sunflowers and Marguerites. It contains a little card with the writing "Thank you for the beautiful performance, from Laura and Miranda'. It means a lot to me. Yellow and Orange are to me the pillars on which I have to build my new company. The Sunflowers remind me of a South-African girl who works in the establishment 'The Angel on the Bridge' in Henley-on-Thames. She called herself 'Zahn' and drawed a flower behind her name, after which I called her 'Zahnflower'.

Then I have said to her 'Once there appeared an angel on the bridge behind my house', on which she said: "I take you with me in a suitcase to South-Africa". Then I gave her as a good-bye present a little statue of a knight that I had bought on 20 April in Westminster opposite the Houses of Parliament. I have not received so many kisses during the last few years as on that evening. 'Miranda' is also the pseudonym of my aimed partner from whom I received from you with thankssaying the geneological data. So she appears to be a direct descendant of William of Orange. That is good, because the Van der Heydens and Oranges apparently went very well along together during the Eighty Year's War (1568-1648). So I keep 'Miranda' high in my banner. This week I still saw a photograph of her in a red and purple combination. I call that photograph 'Vision'. It dates from the time that we in NOORDWIJK worked on vision development, in which we let ourselves be guided by the stars. Yesterday she was portrayed on page 1 of the sun, while I only had to be content with page 55 of NRC Handelsblad. So that situation has to be brought into balance rapidly.

My English horoscope mentionned yesterday within this context 'People seem willing to go along with any changes you suggest so there should be no need to alter your plans. Meanwhile, on a deeper level, many of your problems would begin to disappear if you accepted some help. Doing so could prove very profitable'.

I think therefore that I have to accept some help from you and would appreciate if you could warm up for me the contacts with the Start-organization. I really like them to participate in the company Cervantes Recruitment & Selection to be established at Schiphol Airport. This has to become a temping agency for people with a Spanish speaking background. In the article Start is looking for expansion abroad in NRC of last 5 June is stated "We direct ourselves specificly on Germany and Spain. We have serious conversations there" said Start president ing. S. Attema yesterday during the first press conference that the company has ever given. For the foreign expansion plans according to fellow director ir. F.L. Beringen there are to be indicated roughly two important motives. "Our clients ask for it. Not in the sense that they say 'go abroad', but they want to have offers for their whole working area. So not only for their establishments in the Netherlands but also for those in other countries."

My working area now is Netherlands, Belgium, Luxemburg, Spain, England and Wales and my task is building bridges. So I also have to be able to delegate. Therefore I would appreciate it very much if you can help me with building that bridge with Start. They dispose of my Business Plan. Some months ago Jules Zwijnenburg presented this plan to her top management. I have not received a reaction yet, but as the Start-organization also participates in the Government Game Competition, in which I am presented between the cabinet on the steps of Palace ten Bosch, I may presume that they are already working with my plans. So this has to be concretisized now. I hope in this context to be able to count on your collaboration and like to finish this letter with adding the poem of Rudyard Kipling with which I was surprised last 23 April in Henley-on-Thames, Oxfordshire."

I was visited by my son Mark and Mr Gerard Doek. Lion's President of Utrecht Host. I will see in September if I will join the Club here for some time. Nevertheless I promised to come to Stratford. And I surely will. Of course.