Thursday, 20-03-1997. Green Light! is the heading of the paper of today. I think of Prince Johan-Friso. During the last year I wrote him three letters already and mentionned your name. I foresee that you will visit The Hague in due course. 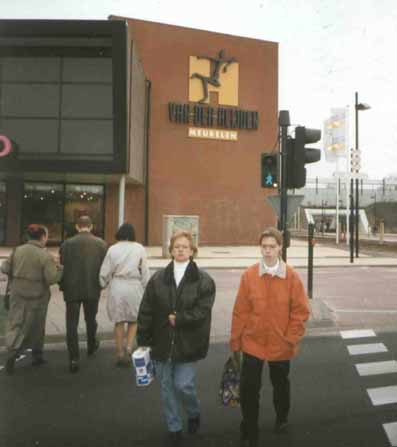 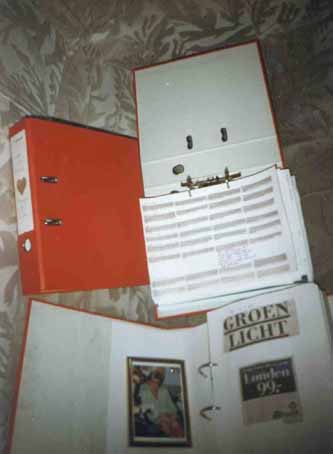 In 1992 she gave me The Word: 'Next year both of us will have a flowering business. Her only superior is the queen. Someone of the opposite sex may be Peter although I may consider myself as a friend of her as well. I supported her from the first moment we met until now. Pisces: 'Your good relationship with someone of the opposite sex now enters into the matter. Keep this relationship strictly businesslike. A financial decision may cause worries.' Here we are. This is a very good suggestion: not getting involved into personal matters. I see before me a traffic light. The day before you left to Australia, Tuesday the 29th of October, I received in my misterious surprise package three lights in the colours red, yellow and green. I think you are very committed to me because you expressed three times your unhappiness on the 13th of November not to be able to have Christmas together. This evening I will light those candles, keep the signal on green and restart negotiations about the business contract next Saturday in Utrecht. 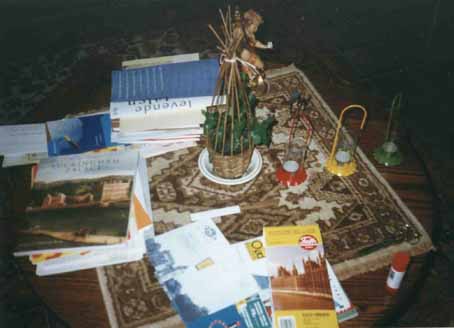 I will start with a telephone call to George. He is not at home. This gives me the opportunity to translate enclosed letters. I was interrupted by a telephone call from someone who has a conflict with de Baak. I told him not to interfere. I don't want the work of Elizabeth to be damaged. So here you find the translations. JH/WS961011: 'I like to thank you for the confidential conversation to which you gave me the occasion yesterday. I will execute the discussed issue. Evenso I confirm that I decided to devote myself to educational tasks within a European Perspective. I am prepared to establish myself therefore definitively in the United Kingdom.' Dank. 'Dear Sweetheart, Harry sent me the new programme of de Baak. I like to react from a personal point of view because I have been frightened of your photograph, that fills me with concern. I have a photograph of you with a smiling face in a golden list. Now you are looking worried, depressed and tired into the world. I have that very much at heart. You may know that. You still mean a lot to me. I hope you will care well for yourself and that other people will care for you too.

I think that my developments towards the United Kingdom meanwhile have become an irreversable process. This week I visited Palace Het Loo and made there some new commitments. Meanwhile the secrets of purple are going to leak out slowly in this country and I have not so much need at this moment to reach the press, although in some occasions it can lead to a solution. That experienced Diana this week after I found last Sunday the photograph of her that I sent to you with the cap with the lettering '492'. This set me very hard to thinking and I asked myself where it came from. The sauna in Oz meanwhile has become the place where the secret communication took place and I obviously start from the idea that everything I write to you will remain confidential ever. I will never abuse that confidential relationship. Already in an earlier stage that I reported to you I met a London bus with 'Honeymoon Travels', here on the Maas-Waal Canal a boat with the lettering 'Success II' and last week I also noticed a purple Mercedes D190 on a known place after I had determined that purple also had become a fashion colour in cosmetics. Yesterday... (12.04 New helicopter survey) ...I noticed on the same place a car with the lettering 'Yes Uncle John' a while after a car had passed me with the commercial 'Fly Away with British Airway' and the 'Land of Hope and Glory' had sounded in many houses. A lot of things has preceded this week. Last Monday I took action direction United Kingdom. Tuesday I tuned in on BBC1 and gradually the messages came over. It began with the scandalous story in The Sun and Diana's reaction that it had something to do with her 'first engagement after her divorce'. On 13.35 h. an AWAC exploration plane came flying low over my house and the stream of gossips reached gale force. Diana herself came into picture during her visit to the London Lighthouse in a red suit of which I was very charmed and that appeared familiar to me. In the evening turned out the hoax of 'the sergeant' and the rest I will keep secret. Fortunately it has made an end to all the gossips around her. Wednesday I went again to the sauna. Then I got the number D220 and combined this with number '492' on Diana's cap of the photograph I sent to you. I read D220492: 'Diana, 22nd of April 1992', so. On that day I visited you. That day has to me the same significance as the 28th of August 1996 to her. From that moment on I am completely conscious that I have to take up a new responsibility and that certainly will do: the education of Prince William. With that task I will help her and if that might turn into a personal relationship perhaps that might be good as well. But then I am thinking too much ahead perhaps. That the Family Van der Heyden appears to be an old high noble family is only favourable in that aspect, certainly regarding the reactions to be expected from British Aristocracy.

Just now I played that CD 'Poppetje Nummer Een' with the theme of the hunter and his cage, protection and gardening, but also the flipside "You're my number One'. In your Survey 96/97 now is to be read on page 68: 'Diana/John: Execution of Educational Policy' and in the left corner I sticked her photograph of the AD of last Thursday.

I promised Harry to be present the 13th of November. Then I have to arrange something in the financial atmosphere. Diana at the moment has an eye on a house near Hyde Park and I can not come with empty hands. Now she needs real protection. The government is not coming over my bridge very rapidly. So I will have to take out a loan of a couple of millions. In the time to come there will be suffiently coverage by the bank. But before I leave my action plan must be executed by good people and I think it will be good that I come and give you a big cuddle. In public. In the hope you get new energy for the future.

There is one thing that I have learned on 'PRINSJESDAG': a captain can not sit on two chairs at the same moment. The choice is now to Diana.'

Counselling 'With a lot of interest I took notice in the programme of de Baak of the programme 'Diana: Execution of Educational Policy'.

I proposed myself to develop a career- and educational plan for two young men with the ages of respectively 14 and 12 years who in the future will have to carry heavy responsibilities within a European Perspective. The instrument 'DIANA' in my vision needs to occupy an important position. Before I will assist a group meeting I consider a personal conversation important. I like to receive from you an invitation for a conversation.' I am prepared to come to St. James's Palace next 18th of April to discuss the possibilities to work out such a programme and hope to receive an invitation for a conversation about that issue. My sister called. My mother is taken into hospital. I have to care for my father now. I noticed a car with number YP-25-LT (Yellow Peter - 25 - Levende Talen). It is a Toyota Carina colour light blue metallic. The dealer is Mr. Scholten. Once I showed your photograph to Mr. Scholten on occasion of the introduction of the Toyota Camry....... Ssssst........! 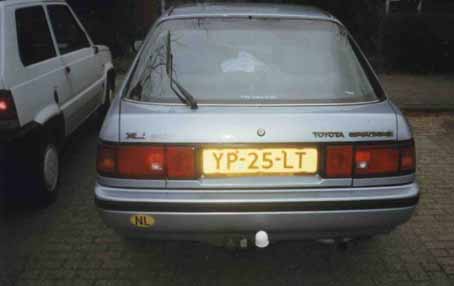 The situation is rather well under control now. I visited the new Van der Heijden furniture business that opened today. The family is very proud of the name as it appears to me. This branche has yellow as their house colour. I told them mine is purple and that I am going to combine it with green and red. I advised them to furnish the Valkhof Castle over three years. They will! It's still all phantasy but I think it's going to work. I received a fax from Maxwell-Heppell. She thought there might be any misunderstanding. So I gave her a ring and explained that I understand the brochure completely. She will be delighted to show me around at 2.00 PM on Friday 25/4/97. I told her that I would like to have a conversation with her afterwards. I set every step on the right moment. Now you are on page 3 of the Mirror in the Perfect Position for Whitehall. Completely neutral between Cherie Blair and Norma Major in the public spotlight. Perfect! It reminds me of an earlier combination in red, white and blue. Blue has changed a little into purple: the fabulous trouser suit of Cherie Blair. We shall see who will remain the real First Lady actually.

I love your humour! Actually. Let's see who appears next on the stage! Maxwell-Heppell offered me the whole estate already! I sent a fax to George with the message "I'm heading Whitehall today and my position is neutral (more or less)". Everything is going to be new. There will be a New Tutor as well who will not be speaking only in English dear Mother Teresa. Now I really like to receive William and Harry's educational programme of ETON COLLEGE. Then I can make a start to study the desired profile of the New King of England. Have You any idea who will be the bravest? I Serve Five Royal Houses Love! The English horoscope. I wrote it already today but I still have to learn a lot about 'pixie boots and Oxfam cast-offs and getting to know Su Pollard. This world contains so many personalities.

By the way: The world statesman That's Me! But I will allow You to stay on my side instead of Peter Andre. I received the vocabularies Dutch-German from Readers Digest in Katwijk, the residence of FamilieBedrijf. I also received an inscription form for a V.I.P. Contest. I think they do not realize that I am a M.I.P. Just like You! This is the start of the language training of a Super King. I think now I have invested enough. Let's get to work now!

I start with studying the British electoral system and the political issues: Constitution, Economics, Education and Europe. I already made clear my personal point of view. Particularly 'Constitution' within the framework of the European integration process towards 2000 will be the main issue of your son. I see the problem very clear and the solution as well. The first of June we will know more, but my personal influence has started already and I seriously count on your support. Now I will light the green candle and play the music of the Band of the Grenadeer Guards of BUCKINGHAM PALACE.