Last night I had A Dream: 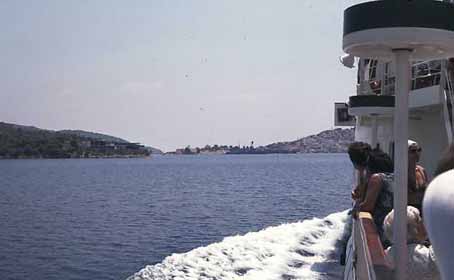 I was walking along the banks of the isle of Hydra. Suddenly I saw you sitting on a terrace. I offered you my hand and said: "Come!" And we jumped in the cristaline deep blue water of the Egean Sea. We swam twenty minutes offshore and then you said: "They might have seen us". "That's no problem" was my reply. But suddenly you disappeared and I found myself only surrounded by blue water. A green and white helicopter appeared, like in former days and circled a few rounds around and set course in western direction. "To Our financier", I thought.

May I congratulate You on the 67th birthday of Her Royal Highness Princess Margaret.

10.00 Our guide gives a last speech on British territory about our hostess Queen Elizabeth II (Alexandra Mary) and starts with the history of the oldest democratic society of the world, starting with the Magna Charta of King John I in Runnymede. 1688 Bill of Rights, marriage of William and Mary . She continues with the life of Elizabeth: 21 April 1926 - Baptized with water out of the Jordan. Now I realize the special relationship between Her and King Hussein when I saw them on The Mall in summer 1966. I also noticed that He has a house in Windsor. She is fond of horses and dogs, like my former Elizabeth. 1937 King George VI on the throne. 1947 Marriage with Prince Philip. On 26 years head of a World Empire. Your Sir Winston Churchill sends Her a letter: "The Cabinet in all things awaits Her Majesty's Command". She moves from CLARENCE HOUSE near St. James's to BUCKINGHAM PALACE. Then our guide Mrs Ter Laan reminds us of the year 1994, the "Annus Horribilis" in which We have been so terribly involved. She expresses her deepest concern for Queen Elizabeth and her concern for the Monarchy. And I agree with her, Diana. At 10.15 she says:

"Without devotion Di's love will Fayed away"

I think she is right. This morning I left a letter in Windsor with the text:

"Dear Sirs,
As the founder of the Foundation Cervantes Benelux, the owner of the trade mark Instituto Cervantes in the Benelux for Education and Training, Concolleague of King Juan Carlos of Spain and owner of the Limited Instituto Cervantes England and Wales I would like to thank you for your hospitality during the last four days. I hope to come back to the Royal Palaces of England very soon.

The facts are my historical legal rights. The fantasy is what I dreamt last night and history proves that historical dreams have become historical facts afterwards. Always! A hastily arranged meeting took place at Heathrow last night when I was "accompanied" by two Arab speaking gentlemen. I am still worrying indeed that You get into wrong hands. I repeat: only the money is interesting, but it must not lay a claim on You! 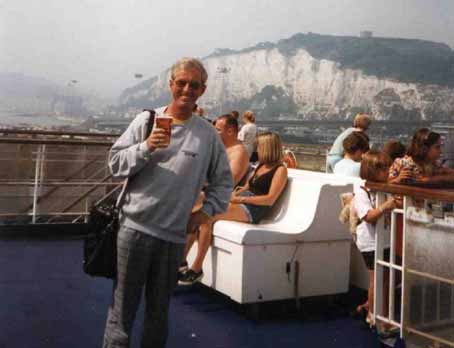 Bye Bye White Cliffs of Dover
We'll meet again
I left my heart in England
But will come back again!

14.20 Conversation with Mrs Spencer from Hanover (Hameln). Nice! I noticed a FBI functionary and some Dutch soldiers on duty and expressed them my gratefulness for their presence. The journey ended with a dinner in De Keizershof (The Imperial Court).

After my arrival in Utrecht this time I was in Greek atmospheres, because I received a letter from Hollywood, California. On Your health and happiness now I drink a glass of 'Tsantalis Naousa Epilegmenos (Reserve) 1991'.

The letter says: I think from now on I have to share my information also with him. Mr Lesèvre is also very acquainted with Mr Clinton, as You know.