Tuesday, 22-07-1997
I see you in The Mirror on page 3 in my favourite colour and the message "With Love from Diana X". That's nice Dear. I am glad that Love And Affection is going to be topical. I tell you what happened yesterday and today. At 13.00 I sent the following fax message to Mr Sharp: Investigation. At 13.15 the same message to Mrs Sorgdrager. Then I went shopping and met a travestite. Then I had a phone call with Mrs Piekema of Palace Het Loo. I confirmed our conversation in a letter of which I give you the translation:

"Date: 21 July 1997. Concerns: Diana Project. Dear Mrs Piekema, With reference to the letter of last 30 June to your colleague Mr Paul Rhem I herewith confirm our telephone conversation of this afternoon regarding a reservation on next 28 September. I have understood that the King William Room is in principle available for 6000,- guilders for the new family company Van der Heyden/Spencer being the planned Instituto Cervantes Holding Limited, that will be established in Stratford-upon-Avon. This is already known at the District Council in Stratford and The Prime Minister of the United Kingdom. I also noted that the Anglican Chapel in principle will not be used for weddings. As my proposed marriage with the Princess of Wales shows some similarity with the marriage between William and Mary in 1677 I may presume that on this after 320 years again an exception can be made. For the good order I report that I will send a translation into English to My Lady in my Weekly Report Number 30, etc. etc."

Then I was visited by Mrs Van Putten-Cleveringa. I explained her everything about the Diana and Cervantes Project. She was overwhelmed and very enthousiastic. We agreed that she will get into contact with Mr de Jong, Schiphol Airport and Elizabeth. So the process has started now and can not be stopped anymore. This morning I read that Sir James Goldsmith died this week. Perhaps his capital can be invested in Instituto Cervantes Holding Limited. Is this the same man who guided you to Pakistan? I also read that Mr Louis van Gaal, former coach of Ajax Amsterdam and new coach of Barcelona followed a training in Spanish at Linguarama Hoofddorp. I visited this office on occasion of its opening in April 1993 because I was the first manager of this institute. The actual director is Mr Hans Aniba. He knows me very well. But I was really shocked about the article in de Telegraaf (page T9) about the murderer of your beloved Gianni Versace. I probably recognized him as the travestite that I met yesterday. So at 10.00 I sent immediately next fax message to Mrs Sorgdrager: 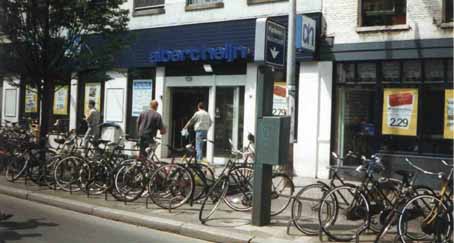 'Concerns: Security Measure. Number of pages: 2. Dear Mrs Sorgdrager. Next to my fax message of yesterday 13.15 I report to You that yesterday afternoon at about 15.00 I have seen entering the on added photograph depicted person - or someone alike - into the shop of Albert Heijn in de Voorstraat in Utrecht. It was a remarkable appearance, disguised as a travestite. As Mr Versace had weekly direct telephonic contact with my aimed partner I do not exclude that this person has flied from Florida to the Netherlands. He is a cool killer. So again I fear for my life and hope to be able to go to the Fitness Centre Scheepstra on the Oudegracht 40 - where I do daily heart fitness - in all safety and tranquility. Added: 'Moordenaar Versace was op feestje van z'n slachtoffer".

I do not exclude that he is using my passport. At 10.30. I sent the following fax message to Mrs Van Loon of the Scientology Church in Amsterdam. "Dear Mrs Van Loon, Perhaps you have heard that I lost my wallet last Saturday, to criminals. Every thief is a criminal and I consider this as a very serious matter. The wallet contained amongst other things my passport (number K 147958), driving license (3114763650/068187038), photographs of my aimed partner and of the establishment 'The Angel on the Bridge' in Henley-on-Thames (Oxfordshire GB), where my fairy tale has started. Also my agenda has fallen into hostile hands and I have observed a very suspected person. As the enemy with the help of my agenda can anticipate I am urged to go and use another agenda. For the good order I report you that I reported to the highest security officers of the Netherlands and the United Kingdom. If there will be news from your head office in England, then I will be grateful to hear that, ICNBLEW etc.etc" .

Back from the police office. I had an official report made by Mr Ad Kreuger.

Fax message to Prof. Dr J.G. Knol. I met him yesterday at 'Scheepstra'. He is President of the Board of Supervision of ISW Studies (Instituut van Sociale Wetenschappen, Institute of Social Sciences), the greatest Management Institute in the Netherlands (Not the best. That is de Baak). I think he can be usefull. I worked some years together with him. The English horoscope. I think Mr Grant is right because I'm running out of my photographs. But using power is the only way to achieve my objectives. I am happy that I have England and Wales on my side. It's only a pity that there is a sea between. My compliment concerns your red dress. Nice. I love that colour. I read the article 'Should men like this be judging Prince Charles on morality?' on Page 6 of The Mirror. I don't agree at all with the writer. The bad behaviour of his predecessors is not an excuse for his adultery. We're living in modern times in which We have to set an example for the future. I repeat: Dishonest behaviour is a bad example for a future king. Examples are set. Henry VIII had six wives. It was not good what he did with his wives, Anne Boleyn for example. But he founded the Church of England and made it possible to members of the Royal House to marry a second time. On a legal basis. The article suggests that Edward II, James I (VI of Scotland) and William III were said to be gay. I am not gay. But I waited five years until I could start a new relationship. And I want to be your King. That's why I turned to the Church of England! Fax message to The Editor of The Mirror: "Concerns: Kingdom. Dear Editor, This message is to announce that I do not agree with your conclusions made on Page 6 of The Mirror of today. Yours Sincerely, etc. etc."