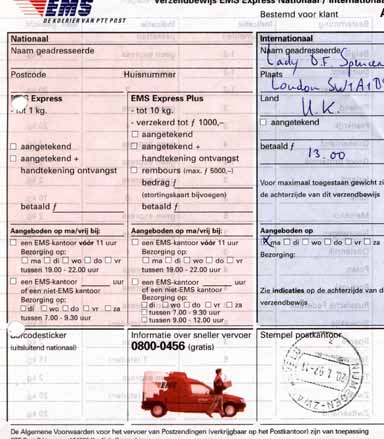 20 January 1997
Weekly Report 1. Dear Diana, Last week I received from Reader's Digest three Compact Discs with the music of Giuseppe Verdi and the beautiful sounds of AIDA. AIDA is also a marketing instrument as the abbreviation of Attention Interest Desire Attraction. I think I am going to be completely aware what this means in my personal experience having read the article about you and Mr Khan on the pages 28 and 29 of the Daily Mail of January 10.

I was struck by the look in your eyes watching Mr Khan's operation.

I saw that look before, but this time it produced another sensation. I reached phase number 4 of the AIDA formula now. A sensation that I never felt before. A sensation in which I felt myself incapable to rationalize for a while. I hope your photograph on page 29 will be your answer to my question 28. Now I realize that Mr Khan offers you hospitality in his house in Stratford-upon-Avon. I visited Stratford on the 9th of August and my Christmas card was borne there. I think I must be grateful to 'your' heart surgeon and his family that they offer you the possibility to stay some time in Stratford in an informal way and to communicate about heart matters. The article also put things into clearness to me. I quote the main passage.

"The Princess described the suggestion as 'b*******' (I think I know what you mean), adding: 'It has given me a lot of laughs.' She is known to be anxious about how rumours of romance affect William and Harry at their schools. The Stratford dinner dates were undeniable, but a friend of Diana says: 'She has lots of dinner dates with male friends, some of them married and some unmarried. It doesn't mean she was having a romance with any of them." I also was lucky with the idea that sometimes you invite people to stay in your appartment in KENSINGTON PALACE. In the near future it will be extremely important to me to have the occasion to talk things over with you for the benefit of my plans but I am completely aware of the above mentionned problem and I am not objective anymore. May be it would be a good suggestion that you invite me to stay for a while in your new house near Hyde Park. I am interested in the Hyde Family of course. It would be a good motive to stay there for a while. I ask you to consider this possibility. I received information about the Marlboro@Project with number 284*****. May be the 28 of April we have something to celebrate. In BLENHEIM perhaps. I reserve the month of June for a trip to the United States in case I might be selected by Mr Robert Wassenaar. I continue this letter in the form of a diary.